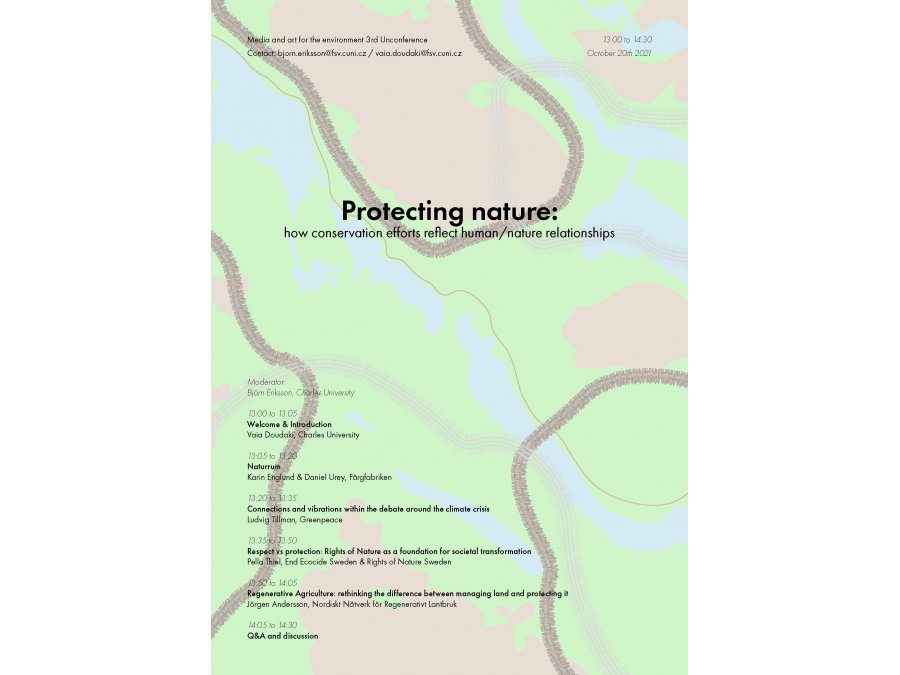 The 3rd Unconference brought together four speakers and a diverse set of perspectives on nature conservation and protection.

“Connections and vibrations within the debate around the climate crisis”

“Respect vs protection: Rights of Nature as a foundation for societal transformation”

“Regenerative Agriculture: rethinking the difference between managing land and protecting it”

Karin Englund of Färgfabriken opened the 3rd Unconference by addressing the phenomenon of Naturrum, architectural portals intended to invite the public to nature reservations in Sweden and through exhibits explain and educate about nature. Together with Daniel Urey, Karin critically examines these spaces to investigate what purpose they serve and how their use can be understood. While intended to be gateways enabling deeper understandings and exchanges between humans and nature, perhaps these spaces have begun exhibiting characteristics exclusively useful for humans. They seem to often be built for the sake of architecture or for the sake of attention, rather than to serve the needs of nature or to practically enable humans to spend more time in nature reserves. Furthermore, these architectural spaces, Naturrum, and natural spaces, reserves, often intersect with indigenous people and wild animal needs, sometimes signifying disputes with the state. In our societal efforts to protect and interact with nature, do our efforts become performative for the sake of a human good conscience rather than effective in actually protecting and understanding nature?

Providing a broad perspective on nature protection, Ludvig Tillman of Greenpeace continued the Unconference. Ludvig began by exploring how humans have come to understand nature protection as a necessary notion. Coexisting with nature, living in nature, and living off nature should mean that humans and nature are one, yet we consider us divided. At some point in history humans have constructed nature and set itself apart from it, enabling themselves to think of themselves as potential masters of it. By dividing, we gave ourselves authority to treat nature differently from how we would treat each other. We could own it, work it, kill it. This system is still in place today and it lets us both use nature and define a need for protecting it. From ourselves. Yet we have become so dependent on this paradigm of extraction that we are now unable to even consider living with nature, instead of living off of nature. We have set nature so far apart from ourselves that we do not offer it what we would offer fellow humans: legal rights and opportunities to thrive.

At this point Ludvig disclosed his idea of a more unified relationship with nature as regeneration, an idea shared by Jörgen Andersson of the Nordic Network for Regenerative Agriculture. Overlapping their subject matters, Ludvig and Jörgen described that a regenerative approach to nature would mean that instead of working against nature or bending it to the needs of humans, we have the ability to work with nature. To blend into the already established ways of nature to lift the vitality of nature and humans together. Regeneration would mean a higher collective vitality that would regenerate and reinforce itself. Simply put, by separating humans and nature, using one only in service of the other, puts a cap on the potential vitality of society. To instead consider nature and humans as one and working to support one another's most instinctive vitality systems, we would lift the potential of one another to limitlessness. Jörgen asked; why do we use our best quality lands to produce the lowest quality monocultures? We must learn to be at our finest to enable nature to be at its finest.

How to gear our current systems to do this, Pella Thiel of Rights of Nature and End Ecocide Sweden, spoke of using the legal system to redefine how nature should be treated and enforce a unification of humans and nature. She explains the need for transformative change from the current notion of just protecting some of nature into respecting all of nature. How laws and regulations are the most efficient, practical and understandable way of doing this. We already have laws that consider businesses as legal entities, meaning we have the ability to consider a lake a legal entity. To consider nature itself as a legal entity. This could be the bridge that lets nature not just exist for the sake of serving humans but to exist for the sake of itself, as humans already do, and to coexist with humans, not exist apart from humans. She proposed to challenge the idea of humans as protectors, managers, or extractors and instead consider humans as participants in a living whole. Thus, she joined the other speakers in their call to redefine the definitions of humans and nature and their separation into a unified whole, thus concluding this Unconference.