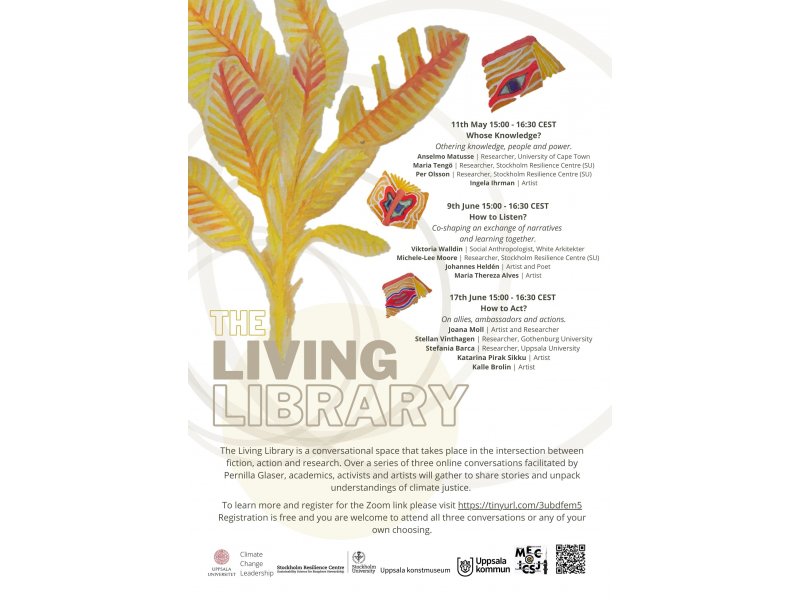 How to Listen #2: Co-shaping an exchange of narratives and learning together.

At the second event of the Living Library, the artists Maria Thereza Alves and Johannes Heldén were joined by the researcher Michele-Lee Moore in a conversation about listening facilitated by the researcher Rebecca Vinthagen. The event began with short presentations by the participants of their work and interest areas and was followed by a discussion amongst the group about the theme Co-shaping an exchange of narratives and learning together.

Focusing on how to listen, Maria Thereza mused on her work with indigenous communities in Mexico whose voices often go unheard in a western and northern art context. Maria Thereza explained how in her own practice she has adopted a method of asking communities what stories about themselves they wish to be told and how she can use her platform and context to amplify their voices, especially by crossing levels of scales from local to global and from south to north she has been able to create situations where these smaller communities voices can be listened to by larger and far away communities, even granting more heft to these voices to wield more power in their struggles.

Johannes reflected some of these listening practices in his artistic work whereby he aspires to convey the voices of nature. His work often blends fiction and future with nature and the present. Through using algorithms and meditation he is able to lose control of his work and allow it to form its own voice at times, granting him the ability to listen to the abstract and complex.

Michele-Lee related to the notion of listening through research. She has often found that research practices that intend to be equitable and to counteract power asymmetries often fall short due to a lack of listening. She relates that it is often not enough to grant a seat at the table to those who have not been listened to before, but that there needs to be active efforts from the listeners to unlearn biases and to learn to listen for the sake of listening, not only for the sake of talking after the listening.

Rebecca was able to summarise the discussion as that there needs to be efforts in research to not appropriate indigenous knowledges, that power asymmetry must be counteracted with more tools than only granting space, and that fiction can be powerful in finding deeper ways of listening.

In closing, Stefania Barca, professor at Climate Change Leadership, was invited to reflect on the discussion and she described how often in the northern hemisphere people are educated in a culture that declares that we have something important to say to the world, that we have science and solutions that if adhered to would solve most issues of the world, not least climate change. But perhaps these are ideals of colonisation and if we were able to decolonise knowledge, decolonise ideas of climate change, knowledges and science would be unlocked to be able to do even more in more equitable ways.