A quest for a magnetic stone

In July 2017, a quest for a magnetic stone in Greenland led me to the office of a local geologist. I was hoping that he would help me finding stones that I could use for making handmade radios or speakers, such as galena, ferrite or neodymium. He explained to me that neodymium is not a stone, but is part of a larger group of metals called rare earth elements, and extracting them from rocks is a complex and energy intensive process. The problem, he added, is that they are associated with uranium: when extracting neodymium, radioactive compounds get released. He then gave me a yellow rounded paper logo with a red barren radioactive symbol...

In September 2022, my growing interest in rare earth elements and their environmental impact led me to Sweden for a two-month artist residency at Swedish University of Agricultural Sciences (SLU) in Uppsala. Carried out in dialogical exchange with Mistra Environmental Communication Programme (Mistra-EC) associates at the SLU, my residency project aimed to create tools for communication about the impact of electronic consumption on the environment, by investigating the mining and recycling infrastructures used for the production of metals and rare earth minerals. I was particularly interested in a conflict related to a project of rare earth ores mine in a place called Norra Kärr. The project has been ongoing since 2009 and brought a mining company against local inhabitants and environmental activists.

These kinds of conflicts are closely linked to the broader discussions on energy across Europe. With the increasing need for critical metals, the European Union has been searching for deposits within its own territory. After decades of outsourcing part of the mining industry to other countries, these new prospects generate fear of environmental pollution and health hazards. However, refusing to relocate mining without decreasing our need for this critical metals and minerals would mean to keep these damages happening elsewhere. These are important discussions that shall be done collectively. Given this background, my project for the AiR@SLU was about creating tools for collective dialogue on the topic of mining for rare earth elements in the European Union. After one month of compiling information about my topic and field case study, I felt like the depth of the research was only expanding. I had been reading articles and papers to understand the process of mining rare earth elements and mapping this information. I was also contacting and interviewing knowledgeable individuals and organizations in order to collect different point of views on the project. I went to Norra Kärr, where I was pursuing signs and indices of land-use, collecting visual testimonies about how the conflict is embedded into the site.

The next stage was to decide how to extract my research from the computer and transform it into an artistic reflection to share with others, including the researchers around me. Setting the aisle of the SLU’s Department of Environmental Communication as an exhibition space made the challenge somehow more achievable.

Micro and macro visualizations of scale

Zooming out from this micro perception of a rock composition, the second installation aimed to show the global scale of the rare earth elements production. Using the university corridor as a giant map-ruler, I placed the most significant mining countries according to their distance from Uppsala. 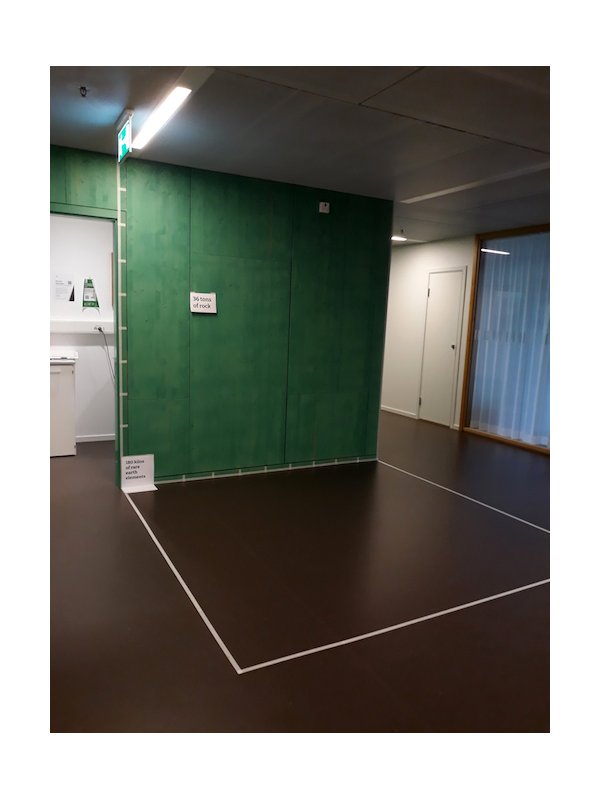 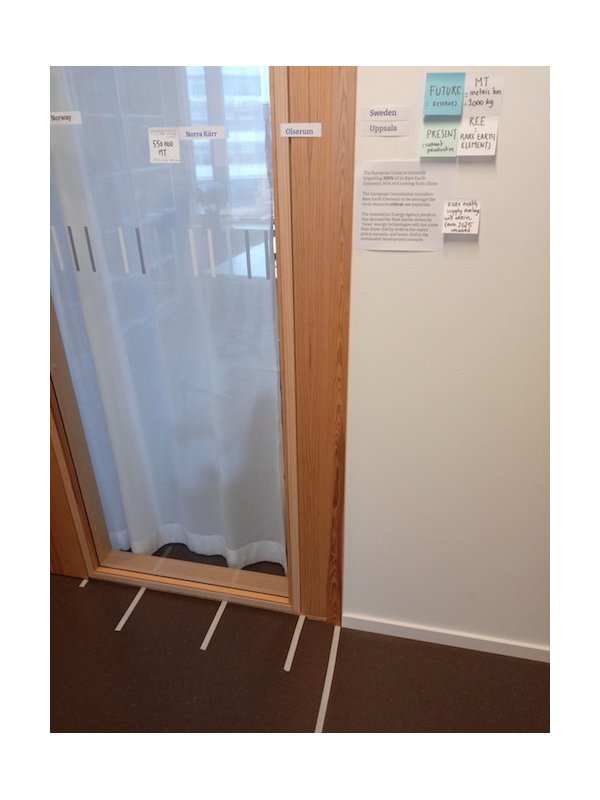 Point of views: at the intersection of scales & perspectives

Accompanying these installations was a paper tool to collect and organize different perspectives on the topic of mining for rare earth elements in Europe, while connecting them with the perception of scale. I was inspired by volvelles: analog paper calculators that highlight the connections in-between multiple datasets.

The Scales & Perspectives workshop, organized during Mistra-EC Programme Days in October 2022, was a beta-test for this paper tool. One positive outcome was to see how it helped realizing that an opinion is made of multiple, sometimes contradicting point of views. I see multiple potential uses for this tool: it can help in mediating a collective dialogue, and also in collecting and compiling subjective environmental data. With the feedback received, I am considering ways of improving the physical tool as a communication facilitator, and creating a digital tool to collect and display nuanced opinions from larger groups of peoples. 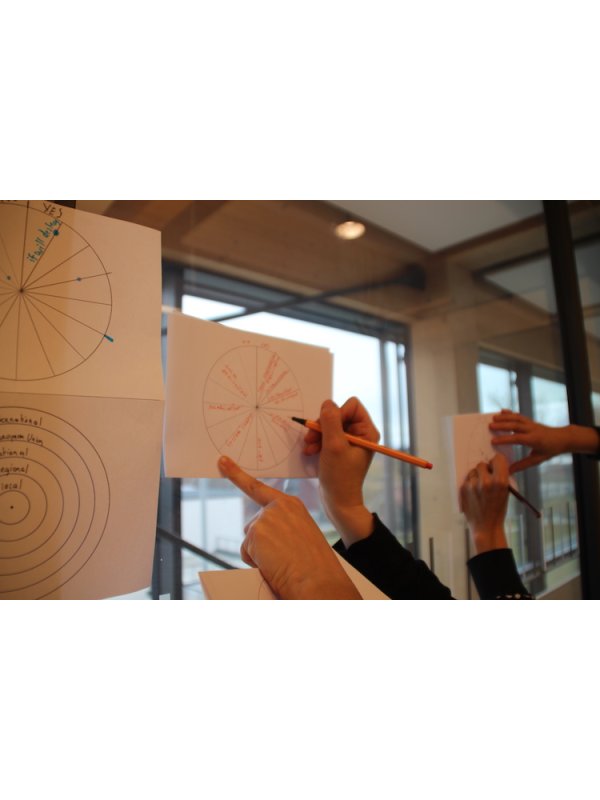 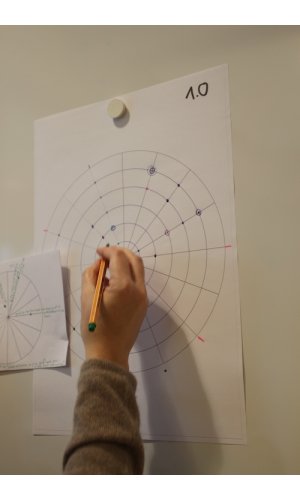 Valuing the process over the result

The short timeframe of the project made me to choose between crafting a perfect visual installation that would be visible only at the end, and prototyping during the creative process, with an opportunity to create interactions early on and learn from others. I chose the latter.

This final reflection highlighted my initial aim of creating a dialogue through this residency project. I am not closing the loop as there is space for improvement and unrealized ideas. I am open to further reflections and constructive opinions from in and out of the environmental communication field.

Thanks to everyone within Mistra-EC and SLU for inviting me, and to all the persons that got involved in every possible way; a special thank you to Sofie Joosse and Fanny Möckel for the knowledge, ideas and support that they brought into the project.

Coralie Gourguechon is an interdisciplinary designer, researcher and artist from France. During the AiR@SLU, hosted by the Mistra-EC research programme at the Swedish University of Agricultural Sciences (SLU), she worked to create tools for communication about the impact of electronic consumption on the environment, with the aim to improve the collective dialogue about the future of electronic production.